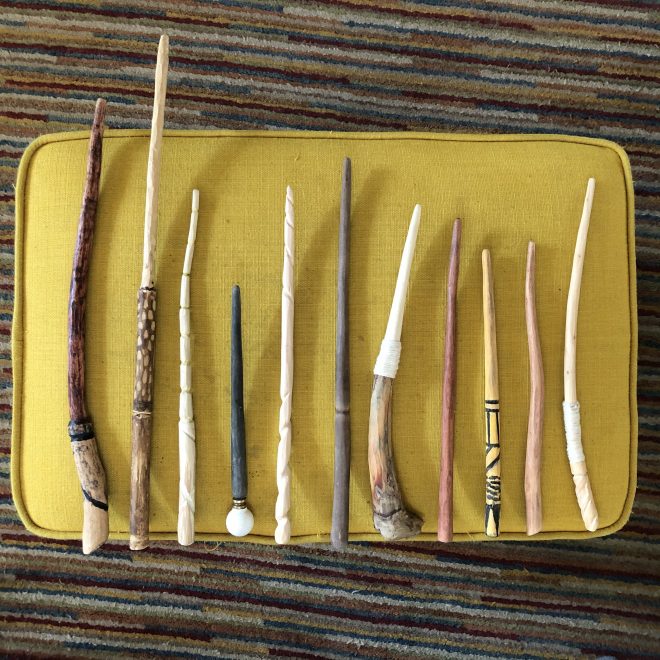 So, first of, the obligatory “JK Rowling is a transphobic prune who shouldn’t have any money or fame, thank you for making Harry Potter, it belongs to the fans now, thank you, get out.”

So, a while back, maybe 2 yeas ago now, I was re listening to the Harry Potter books and had been wanting to get back into wand carving. Now, as a kid like most my age, I was a huge HP fan. But unlike most I connected with the films FAR MORE than the books. They taught me so much about film making, with each director, cinematographer, composer, effects artist, prop maker, set designer, and costumer continuing to plant the seeds that Star Wars did for me, and making me into who I am today. Whenever we would go camping, my dad would carve us wands, and while I lost many of them, I didn’t loose two of them. well, they made it home… One of them, the longer one, was my wand for years. I took it to Half Blood Prince and deathly Hallows parts 1 and 2, as well as the Harry Potter exhibition, which I went to 5 times when it was here, even leaving school early to go to the opening on my birthday. This thing has been with me for a LONG TIME, and I figured it was the only wand my dad had carved that survived, and even though it wasn’t a design. was fond of, that was the important part, so I held onto it. Then we bought a new fridge.

When the thing arrived, we started to move the old one, and when we heard that iconic wooden clattering sound every wand owner knows, I was giddy. When we started clearing out the hole behind the fridge, sure enough the PERFECT wand my dad had carved YEARS ago happened to be on top of the fridge, and over time had been worn down and smoothed out. this is what I consider to be my definitive wand as of now. This wand perfectly emulates the simplicity and elegance I like in wands from the movies, but still is hand carved and reminds me of good times with my dad. it has a nice curvature to it as well, where the handle section rests perfectly in your palm while your pointer finger naturally extends over the length. The thing had been colored in with sharpie, but since the colors have faded in, I honestly like the look of it. These instances led me into my own wand carving journey.

After that, I felt like I could enjoy listening to my audio book and carving some wands like I used to, so that’s what I did. These range from simple, very laid back wands, to my attempts at intricate designs that have failed. The first two I’d like to touch upon are what I feel to be the perfect middle ground between those two. the upper want was the first one I carved when I re started this. You can see that I had trouble re-introducing myself to the idea of a handle, then a slope, then a length for the rest of the wand, as its more of a colander that then all of the sudden becomes a cone shape gradually. its also quite thin, but looks the part. This was never meant to be so skeletal, but as with most of these wands, I just kind of did whatever happened in the moment. It looks like a tail or something, which is unique, and the handle spirals remind me of the unbreakable vow from Half Blood Prince. What does it mean? YOU decide. The second one here was my way to save a broken wand and ended up being in my top 3 for sure. I used an old, old knob to act as the handle, and colored the length of the wand black with some chalk pastels, and wiped off the excess with a damp paper towel.

These two are attempts at intricacy, but in ways I feel failed. The full curve like a rib was, again, unintentional, but made it unique. The spiral base and wrapped handle were an interesting idea, but not something I would do again. The yellow and black one… I really don’t like this one. It was colored again with pastel, but the black sharpie was bleeding all over the wood and makes it look very cheap. I think it was half baked and I didn’t have the right tools, not to mention I cut myself making it and this was NOT worth the scar I have for it. I only really kept this one because I haven’t sold or thrown out a wand and I have space for it. other than that, this one is a failure.

These two experimented with simplicity a lot. I like these two a lot for just that. Simplicity. I didn’t push it too much, and it just works in my mind, but I could be better. So, for the top one, the curve was again unintentional. When you carve live wood, it is still a bit moist, and when it dries, it shrivels, so it’s kind of out of your hands how it turns out. but this one was a layer of dark brown, a bit of purple, and dark brown. The color is nice, but there isn’t a lot to talk about design wise other than its nice. All the wand I make are sanded, but these two were probably sanded the most to bring out color. The bottom one was a VERY SIMPLE one, but I tried to carve asymmetrically and keep it straight as I could. this wand is shorter than the other ones, and closer resembles the ones they talk about in the books, being shorter and more stout. I did a pass of medium brown, then red, and overlapped them, and sometimes let each color be singularly that color by its self, which added streaks and variation I liked a lot. My girlfriend also coated this I wax, so its nice and smooth, and has a good feeling in the hand.

These two are more simple wands I made. the top one I find un interesting. its a bit stale, and the spirals are nice, but nothing crazy. The bottom one is great though. The faded color I added was a series of princes with water to age it, and it has a strange bend all over the place that I enjoy. it has also been sanded a lot, and makes it very very smooth, and is my favorite of the “simple wands with color” by far.

Now here it comes. The best one. My favorite wand. Now, I’ve had this stick in my yard for YEARS, and its this great old knob of wood, and it had all this texture, but it was too short to be a walking stick, or a staff. So one day I was like, “Huh, what could I do with that” and here we are. I sawed it off and got the handle, and what I thought could make the length of the wand, but a after a minuet I realized it wasn’t right, so I cut it down to a handle. I then made a separate piece to act as the tip, and made a slight story in my head of this being the wand of some rugged bounty hunter (or whatever they’re called in Harry Potter) who broke it, and then was able to replace the core and get it working again. to not bream the story I had made, I added a wrap around the middle and didn’t color the tip at all, leaving it almost white. I LOVE this wand. I think it’s great. if you look closely, you can even see blood stains on it form when I cut myself making the yellow one and made that part of the story as well. I love stuff like this, and the story, detials, and intreigue are why I like making props in the first place.

I hope you enjoyed hearing about the wands I have carved over the years and that it inspires you to make your own, or just made you happy. Thanks again!