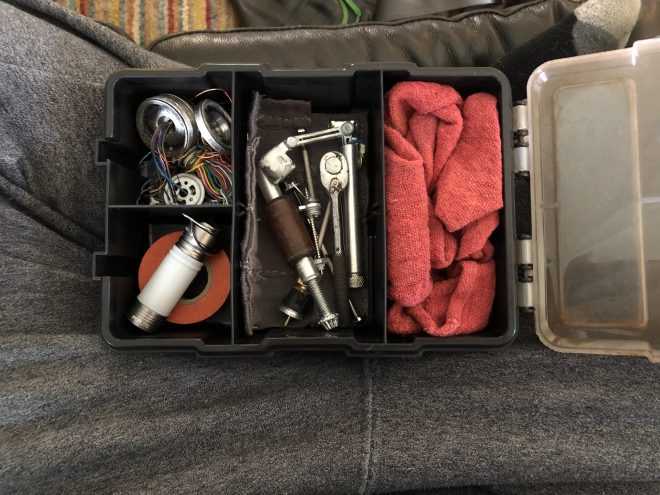 A while back I assembled a tool box with tools that fit in the Star Wars universe for my ongoing original Star Wars character, and I thought I’d break them down for you! I couldn’t find any screen used tools for reference except very far away shots from the franchise, so I basically made my interpretation of these tools out of various scrap parts I’ve collected over the years. For the main box, I wanted to build it out of metal like the one seen in The Empire Strikes Back on board the Falcon, but with a lid on top and a couple nice leather hinges and clasps riveted onto it.

However, doing sheet metal projects can be very expensive and complicated. So, I decided to use a plastic sorting bin I had lying around in my basement and did a pass of weathering. I made scratches with sandpaper and screwdrivers, and then did a heavy wash of dark brown over the entire thing and whipped it off. I also attached a segment of an old belt to the top to act as a handle and removed a divider inside the box, covering the hole with gaff tape. I then sprayed a clear coat over the whole thing and called it a day. And while it wasn’t what I had planned for, I think the result turned out great!

Inside the box I had one compartment for a red shop rag I burned a couple holes in and burned the edges of a bit. In the middle compartment were the purely cosmetic tools that I made as well as some that I actually needed for certain things in the costume, the bottom left compartment holds a mini lantern that has a magnetic bottom and a roll of electrical repair tape, which calls back to a couple of moments in The Force Awakens. And finally, the top left compartment holds “spare parts” and wires.

For the “spare parts” I used my collection of hard drive parts, old scrappy wires, and even a bit of silver conduit tubing. I also combined a few hard drive parts with a broken ball bearing and some of those wires to make my interpretation of a replacement ship part, and used epoxy to glue them all together. In the end, that piece became one of my favorite details of this project.

Now, onto the tools. The first tools I made were my interpretation of Star Wars screwdrivers. I used the base of a very small screwdriver that the tip had snapped off of and combined it with another metal stick part to make for a strange off set look. I even used a small segment of silver conduit tubing from a LEGO set to call back to all the times they’ve been used in the other props and costumes throughout the saga, and can be seen in the repair parts bin in the box as well. The second tool in my mind would be used for small outlets in electrical sections of engines. The head is part of a spinning hard drive section on top of a longer screwdriver.

This tool was supposed to call back to the Podracing scene in The Phantom Menace where young Anakin Skywalker’s engines fail. He inserts a strange two pronged plug into the main console and starts to flick a separate switch back and forth to start the engines back up. I wanted to combine the two functions and make the plug and switch into one tool to show the evolution of the tool over time in the Star Wars universe. I used another screwdriver part with the spinning section at the base put backwards inside of a brass plumbing part that had two removable nuts on either side. The hole perfectly fit the screw driver and made it removable if necessary. The loose bottom of the screwdriver makes the flicking motion possible. On the other side of the screwdriver, I glued a connector from a florescent tube lightbulb on top of the brass plumbing piece to replicate the two prongs seen on the original prop.

For these three thinner, more compact tools, I wanted to make a roll up fabric sleeve, so I used some scrap grey strapping I had and then hand sewed the WHOLE THING together, using some slip clasps to hold it together. I don’t normally use it, but I’m very glad I made it.

This next piece is a call back to the first episode of Star Wars: Rebels where Ezra uses a tool made for an R2 unit wall socket to hack open a door, which I imagine would be helpful for interfacing with ships without the use of a droid. I used a part of a dog crate for the handle and sanded it with 60 grit sandpaper to get a brushed aluminum look to the piece. I then added a segment of a leather belt to the handle and sewed it up to add contrast and look like the original tool. For the top part I used a screw I found about 4 years ago on the ground, and worked great to complete the look of the piece. (I also put a brass fastener for paper documents on the bottom to fill the hole left behind)

For the last decorative tool, I wanted to replicate the tig welding tool seen in Empire Strikes Back used by Chewie and Han throughout the movie. The original prop is much larger than the one I wanted to make, so I again used the dog crate parts to act as another handle and put a long and thick Knurled Screw in the bottom and glued it in with epoxy to add weight and plug the hole. For the adjustable head, I used a part I had from a small book light styled to look like a vintage lamp from a local dollar store. I painted it white and then added silver sharpie marks to look like chipped paint. I then added ANOTHER hard drive part to act as the tip of the tool, and used the burner from my stove to add scorch marks, giving it an orange and blue hue which I really like. And for the activation button, I used a broken wire I saved from a sleep study, and the brass cone looked perfect for the prop. I stuffed the excess wire inside the handle and left a bit of wire exposed for detail, then glued the head and the brass cone onto the prop. I then applied a clear coat to the adjustable head to make sure the paint job was safe, and that was it.

The last three tools in the main compartment were actually practical tools used for my previous custom blaster build. The two Allen wrenches are used for screws on the scope mount for the blaster and the other Allen wrench was used to loosen a couple of set screws holding down a small detail on the other side. The socket wrench was handed down from my great grandfather and has a 5/16 socket head on it to loosen the hose clamps holing down the scope. Since they look somewhat fitting and relate to my costume and character, I decided to put them in the box as well.

That was about all I could fit inside this box, and it makes for a complete set of tools I would see being used in the Star Wars universe, and also makes a great edition to the props and costume items I have made within the Star Wars universe. I take a lot of joy in knowing I am one of the few people who has actually made a Star Wars toolbox, and who also posted in depth information on it, hopefully giving those of you looking to make one yourself some ideas. I am also happy I was able to make an homage to every ship repair scene I could think of throughout the movies and shows I love, and I had a lot of fun figuring out what pieces I had that look like pieces in the films and adapting them into my own designs. Thank you for taking the time to read this, and I hope your ship doesn’t break down as often as mine does!